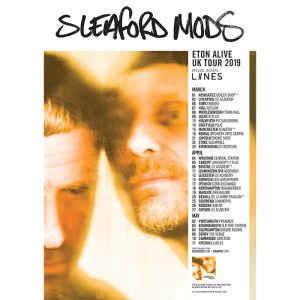 Sleaford Mods – one of the most vital and relevant bands around – announced their Eton Alive tour today and we’re happy to say LIINES will be joining them across all 32 dates.

The news rounds off an amazing year for the band who released debut album Stop-Start through Reckless Yes in May. The limited edition white vinyl sold fast and the last few copies are in the band’s store now – make sure you get it now before it’s gone! Buy here:

The Paul Tipler-produced album gathered acclaim from the likes of John Kennedy, Steve Lamacq and Amazing Radio’s Shell Zenner as well as a 4 star review in Q and praise from other publications. 2018 has also seen the band play Dot to Dot Festival (Manchester and Nottingham), Ramsbottom Festival, and a headline set at Words And Music (Manchester).

Frontwoman Zoe McVeigh said: “We are overwhelmed. Sleaford Mods are one of the most relevant, vital bands in the country. To be touring alongside Jason, Andrew and the Mods team will be an incredible and unforgettable experience. We can’t thank them enough and we cannot wait to play every single one of the 32 dates! It can’t come soon enough.”

Find LIINES in these places: