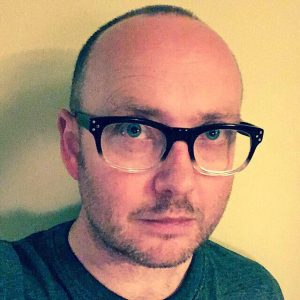 Peter Darrington was born in Derby and grew up in the Derbyshire village of Riddings, approximately three miles from the village of Pentrich. He studied English Literature and Drama at the University of Derby before pursuing a career in the music industry as a professional musician throughout the 1990s. In 1999 he began working in the broadcast industry which is still his ‘day job’.

He began writing in earnest in 2011, script writing for independent radio and television production companies and was a finalist in the prestigious Red Planet Pictures screenwriting contest. In 2014, his stageplay version of Pentrich – England’s Last Uprising won a BBC play writing competition, which led to it being produced for a total of three arts festivals, which is the basis for his debut novel.

He still writes and performs music with his band’s Heavy Pets, GodNo! and SeiSui, as well as previously being a member of Cable and The Hudson Super 6. He freelances as a music journalist for national print music magazine Louder Than War as well as being co-founder and owner of the independent record label and publishing house Reckless Yes Records.

He lives in Derby with his wife and three children, a silly amount of vinyl records and has never missed an episode of Doctor Who since he started watching the programme in 1975. 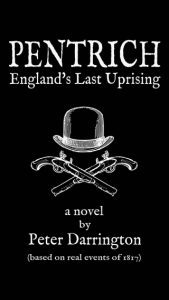 George Weightman wants only to feed his young family and earn a fair wage when he joins a secret network of radical thinkers dreaming of parliamentary reform that eliminate poverty in a post-Napoleonic war torn England.

But as Plans escalate out of control along with egos and selfish motivations, an attempted working class revolt to destroy the government goes horribly wrong with cataclysmic results for everyone involved.

Based on real events that took place in Derbyshire and Nottinghamshire in 1817.

Also available from Amazon on all formats including Kindle – find it here.