Massive congratulations to LIINES, who took home the Breakthrough Act award, at the MEN CityLife Awards earlier this week. 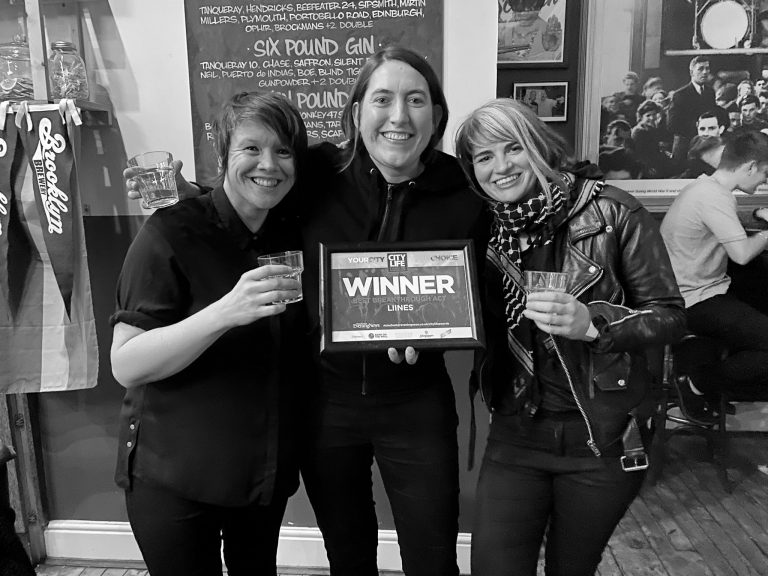 The Manchester-based post-punk band has had an amazing 18 months – a sold out release of their debut album Stop-Start, supporting Sleaford Mods on UK tour, finalists in Glastonbury Emerging, and live dates and festival appearances a-plenty! This year isn’t slowing down for them and they’ve already been announced onto line-ups for Bearded Theory and Kendal Calling festivals.

The Breakthrough Award was open to a public vote and LIINES were announced as winners at a ceremony in Manchester on 27 January 2020. The MEN said, ” Proudly flying the post-punk flag for Manchester, LIINES are a band worth getting to know. Frenetic energy and intellectual song-writing have made them one of the most highly regarded acts to come out of our city in the last decade. Comparisons have been drawn to Joy Division, Savages, PINS and the Yeah Yeah Yeahs, but really the sound of LIINES is entirely their own.”

The band were shocked and delighted with the win, tweeting shortly afterwards: “WE FUCKING WON! THANK YOU EVERYONE – FOR THE VOTES AND TO THOSE WHO HAVE BACKED US EXTRA HARD TO GET US THIS. WE CAN’T THANK YOU ENOUGH”

Also shortlisted in the category were The Lathums, Aitch, Pip Millet and Phoebe Green.

LIINES signed to Reckless Yes in early 2016, having been covered by label co-founder Sarah Lay in the previous year while she was editor at Louder Than War. Through the label the band were introduced to producer Paul Tipler (Idlewild, Elastica, Placebo), released a sold out double-A 7″ of Disappear and Be Here, and went on to release debut album Stop-Start. The record not only sold out in quick time but drew critical praise from Q (4 Stars) and others, finding itself in end of year lists from publications including The Guardian and Louder Than War magazine.

Sarah Lay, co-founder of Reckless Yes, said: “We’re made up for LIINES on this well-deserved win. Not only are they talented and hard-working but they’re lovely people too. It’s been a pleasure to support them on their journey through Reckless Yes, and see them absolutely smash all the opportunities which have come their way. We can’t wait to see what is yet to come for them but are sure they’re a band who are only going to keep going from strength to strength.”

For info on all our artists take a look here and if you’re submitting music to us please take a look at our demo guidelines.