Somewhat of a supergroup with plenty of Reckless Yes alumni among their number GodNo! are making experimental noise rock taking inspirational cues from pioneering groups such as 18th Dye, Sonic Youth, Talking Heads, My Bloody Valentine and Slint. 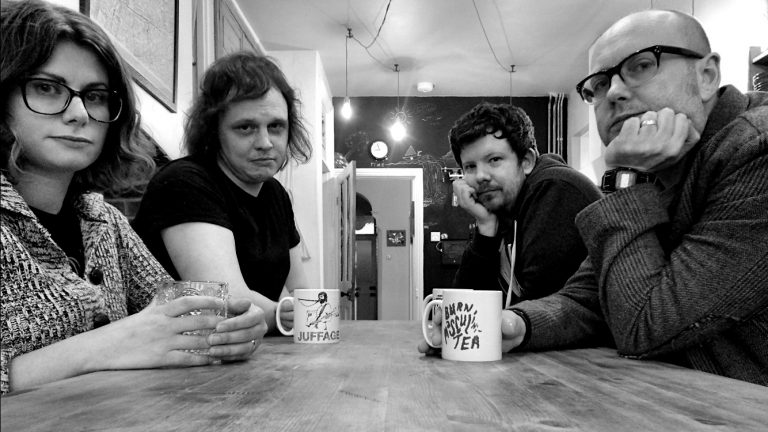 Consisting of Pete Darrington (Cable, Hudson Super 6, Seisui), Shelley Jane (Mighty Kids, Sex Jokes, Shelley from Finance), James Stewart (The Lonely Robot, Little Courage), and Dan Barradell (Pet Crow, Prizefighter) the sound of GodNo! also draws on members’ previous projects as well. The unmistakable angular guitar style of Cable is blended with the melodic post hardcore chord progressions and staccato bass of Lonely Robot and Sex Jokes respectively, while fans of Pet Crow will be familiar with the scatter gun garage drums binding it together. A revolving front-person and shared vocals policy makes for a refreshing and unique dynamic on each song – a band very much a sum of its parts, with collaboration and equality at its heart.

A debut EP is due in early 2020 and we’re pleased they’ll be putting the release out with Reckless Yes.

Pete Darrington – of GodNo! and co-founder of Reckless Yes said, “This is my most challenging music project to date. I’ve never played guitar, performed lead vocals and written the songs all at the same time, so It’s wonderfully terrifying. Thankfully I’ve picked an incredibly talented group of people to embark on this new musical adventure with and the Reckless Yes ethos and philosophy makes for the perfect vessel for us to undertake that journey in!”

Shelley Jane Newman of GodNo said, “The co-founder of the label you’re signed to, who’s also the bloke whose band you loved as a teenager, asks you to be his bass player? It was always going to be a hell yes to GodNo! It’s such a fun band to be in and I now have an outlet for songs about aspirational veganism and being a feminist Hulk. I love having a home with Reckless Yes, I love my bandmates, and I love getting to shout at them all through the medium of song.”

Sarah Lay, co-founder of Reckless Yes and head of creative for the independent label said, “I’ve loved working with all of the individuals in this band in different ways over the years and the music they are making together is the sort which retains a raw energy between its many layers and keeps the detail despite being such a solid block of sound.”

GodNo! are the first of a new batch of signings we’ll be announcing onto the roster at Reckless Yes and one of the releases shaping our 2020 up to be the best year at the label yet. As part of that we’ll also be bringing you some new ways you can support us as a label to keep bringing you the best and releasing our artist’s music in ways you love.

In the meantime, for more on all our current artists go here, and if you’re thinking of sending us your music do check our demo info first.