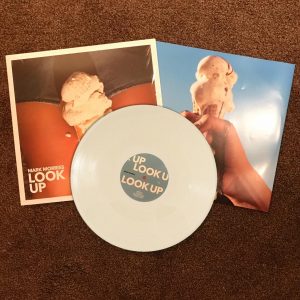 The splatter vinyl edition sold out in mere days, the blue vinyl edition is down to the last few copies, so we’re pleased to let you know that you can now get your hands on a new solid cream vinyl edition of Look Up by Mark Morriss.

The fourth solo album from The Bluetones’ frontman is his most creative work to date and has found critical and fan acclaim on release. Louder Than War magazine gave it a stand-out 9/10 review in their current issue saying: “Wonderfully varied, intriguing, exciting, and exquisite – an excellent job”, while Record Collector said, “The album channels summer-tinged indie-pop, hazy psychedelia and, on tracks like Holiday of a Lifetime, tropical beats.”

Praise was also forthcoming from 3 Songs and Out which in a 5/5 review said, “I really really want you to search this out and discover it for yourself, to be led through this labyrinth of sound, to get lost in it and emerge discombobulated, but totally in love” while God is in the TV went for an 8/10 score and said, “the record isn’t heavy in mood because the songwriting is as influenced by Buffalo Springfield and 60’s jangle pop of The Byrds as ever, “But, Still” and “Mother Moon” are textbook Morriss”, and Traveller’s Tunes summed it up saying, “Not only is the magic still prevalent, it’s thriving”.

Look Up is now available on solid cream vinyl either on its own, or – if you’re quick – as a special edition bundle with Look Up fridge magnet and signed Mark Morriss postcard.

Get your copy now:

You can still get Look Up on CD and as a digital download from our online store and if you’re looking for a copy on blue vinyl Mark has the last of these available at shows and from his website.

A few special in-store performances are happening to mark the release of Look Up and the next one is coming up this week. Head to Truck Store in Oxford on Thursday 10 October for an early-evening event – free, and open to all ages. Mark will perform a few songs from the album, chat with music journalist and Reckless Yes co-founder Sarah Lay and we’ll have copies of the album available on blue vinyl too. Details are here.

We’ll also be at Vinyl Tap in Huddersfield on 14 December – more detail on this to follow. You can find a full list of Mark’s gigs on his website, including what promises to be a very special performance at Glasgow’s Glad Cafe with Sister John.

For a full press pack about Mark go here, and for details of the Reckless Yes roster go here. If you’re thinking about sending us music please check our demo policy first.