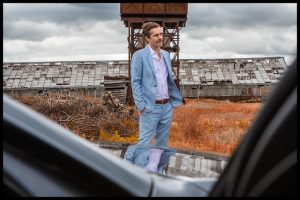 We’ve been finding it hard to keep the Mark Morriss video for All The Wrong People under wraps so it’s a pleasure to see it premiered on Louder Than War today.

Editor in Chief John Robb shared the video saying, “All The Wrong People captures all the hallmarks of what makes him [Mark Morriss] such a fiercely supported artist to this day.

“Dripping with melody and a great chorus and musical ideas the song is kinda like the quirky super-smart pop of mid-seventies bands like 10CC mixed with the optimistic rush of Britpop, and comes with a suitably quirky video that is like the Sweeney meets the Twilight Zone.”

You can find an interview with Mark in the current issue of Louder Than War magazine (available through WH Smith, independent newsagents and to order online here).

Watch All The Wrong People by Mark Morriss

With a The Long Good Friday vibe the video was directed by Gerard Giorgi-Coll and produced by Ben Meadows (who also takes all these ace pictures of Mark).

All The Wrong People is the first single to be taken from Look Up and this is the first time it’s been available on streaming and download platforms. God Is In The TV described it as, “All The Wrong People’ evokes Stevie Wonder’s ‘Higher Ground’ with the liquid ‘Wah Wah’ pedal verses but kicks into a mass singalong chorus that meant this cut leant itself perfectly to the first single release” while Traveller’s Tunes said, “With Steve Wonder’s ‘Higher Ground’ firmly in view, Morriss allows his pop instincts to flourish, arguably to the finest degree since 2003’s ‘Never Going Nowhere’. There are hooks oozing out of this at every turn. The piano licks, sauntering drums, and the wah wah guitar combine to re-imagine 70s funk and soul to glorious effect”.

It’s also enjoyed support from Steve Lamacq, OFI Monday, Cowboys and Indies, and Radio Free Matlock. There’s lots of you digging this tune. Keep an ear out over the summer as we’ll have another single headed your way soon but in the meantime listen to All The Wrong People here.

All we have left is the clear blue vinyl – which we think is a stunner. We won’t be repressing in either of these colours and we’re going to sell out well ahead of the release date on 20 September so if you do want one, act fast. You can get it here.

Will we be repressing in new colours and offering new deluxe bundles? Watch this space.

We’ve still got plenty of stuff to announce but first up is something to look forward to over the summer – Mark will be doing an in-store performance at Vanishing Point Records at 1pm on Saturday 24 August.

As well as doing a couple of live tracks he’ll be in-conversation with Sarah from Reckless Yes and there will be a limited amount of blue vinyl available to buy, as well as a specially designed limited edition poster.

More in-stores will be announced soon so look out for one near you. If you’re a record store interested in having Mark appear get in touch with Sarah – sarah@recklessyes.com.

Get your hands on a signed Look Up test pressing

Those cool kids at The Bluetones Funclub have got their hands on a signed Look Up test pressing and are going to be putting it up for auction to raise money for the National Autistic Trust. Worth mentioning there are only five test pressings, and only one of them is signed, so this is a very special item. Bids will open later in the summer so make sure you’re following them on Twitter and Facebook for news.

For everything else Mark Morriss, including press enquiries and bookings, head here. You can also find out about our other artists and our demo submission policy here.