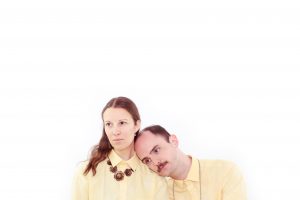 Grawl!x has shared their new video for forthcoming digital single Epicene with a premiere on For The Rabbits. The single will be released across all digital platforms through Reckless Yes on 19 July 2019.

This is the first new music from Grawl!x since we released their third album Appendix in early 2018, and comes ahead of a performance at Indietracks Festival (26-28 July). Epicene is an exploration of gender and identity and is taken from forthcoming fourth album Peeps – more news on the release of this to follow.

Premiering the video For The Rabbits said, “It’s not only thematically but also musically that Epicene is a change of direction, an ever eclectic, and hard to pin-down songwriter, here James channels an almost primal rhythm with a fluttering piano line, creating an atmosphere of tropical-pop colliding into neo-classical creativity. The brightness of the music is perfectly contrasted with the dual vocals that feel ethereal and distant.”

While Grawl!x’ first three albums were a trilogy exploring grief his new work explores other themes including sex and gender. Epicene features fellow local musician Jo Lewis of Umbilica and the two have worked together not only on the track but on understanding the pressures and power structures at play in society.

James Machin – the multi-instrumentalist behind the Grawl!x name – said, “Jo was very patient in helping me square up to the realities of a patriarchal society. I always liked to think of myself as a feminist but realise I have a lot to learn. She’s been incredible.”

You can read the full review on For The Rabbits here.

The video is almost a short movie in its style and structure and features a mix of animation and live action from a small team of local creatives including Sam Jordan, Darius Powell, and Rachael France.

You can find Grawl!x on:

Find the full press kit here and for any enquiries contact sarah@recklessyes.com.