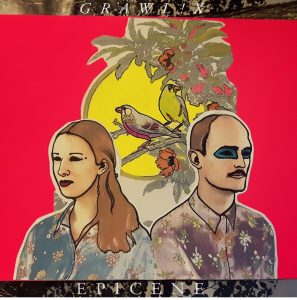 Grawl!x has announced new single Epicene will be released digitally on Reckless Yes on 19 July 2019. The track is the first new music since 2018 LP Appendix (which you can get here on clear vinyl) and features vocals from Jo Lewis of Derby-based band Umbilica.

Grawl!x – the project of multi-instrumentalist James Machin – completed their trilogy on grief with last year’s release. Far from being maudlin the record punctured melancholy with the sharpness of hope and showcased not only astounding arrangement but an astute ability to put emotions into sounds.

With Epicene they have moved into more topical territory – an ambitious exploration into sex and gender. James Machin said: “It’s an issue I’ve wanted to explore in a musical dialogue for quite some time. It’s quite alarming when you realise how great the gender disparity is and how our culture is divided in binary terms.”

A video – filmed by Sam Jordan, Darius Powell and Rachael France – adds a short movie like experience to the track and will be released in the next few weeks (follow on YouTube to make sure you see it!).

The track will be released digitally on Friday 19 July ahead of dates in Derby (Dubrek, 22 July), Nottingham (JT Soar, 24 July) and Indietracks Festival (26-28 July). It is taken from forthcoming album Peeps, about which more information is to follow.

Make sure you’re following Grawl!x on Spotify to get Epicene as soon as it’s released and sign up for the Reckless Yes mailing list to get the news first on videos, Bandcamp pre-orders, and future music from the band. Full information for press is available here and enquiries should be made to sarah@recklessyes.com.

Where to find Grawl!x online: