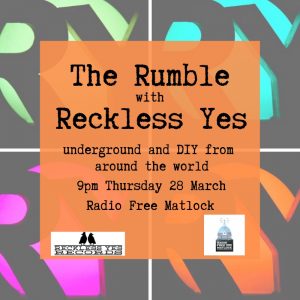 The Rumble returned to the airwaves on 28 March 2019 for our third show for Radio Free Matlock.

We gave you an hour of gems from the underground, unsigned and DIY scenes around the world including a classic album track from the solo catalogue of the world’s most recorded drummer Hal Blaine and two tracks from our featured artist and next Reckless Yes release Panic Pocket.

The Rumble is co-presented by Pete Darrington and Sarah Lay, produced by Sarah and edited by Pete. You can tune in live at 9pm the last Thursday of the month at Radio Free Matlock or listen again on Mixcloud.

This show was first broadcast at 9pm on Thursday 28 March 2019. We encourage you to seek out these bands, buy their music and merch, or at least follow them and share their stuff on social media and streaming sites – support independent music and musicians however you can!

You can listen again to this show on Mixcloud and follow our New Music 2019 playlist on Spotify for more like this, updated weekly (so do make sure you’re following it).

We’re next on air at 9pm Thursday 25 April 2019. If you’d like us to consider your music for the show please check our demo policy and send it to us through that route.