As we’ve recently announced a slew (four) of bands onto our roster we thought we’d take some time to introduce you to each of them in turn. Today we’re telling you a bit more about Mark Morriss. 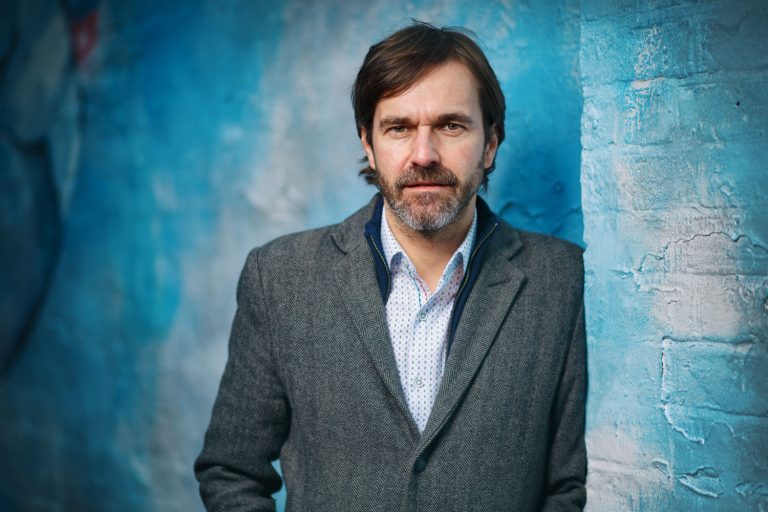 You may know him as the voice of Britpop indie band The Bluetones and whether that’s your thing or not you’re likely to find his new album, which we’ll release this year, a synth-pop surprise. There’ll be some who may deride without listening but they’re missing out – as soon as we heard the album here at RY HQ we knew it was one we wanted in our catalogue.

Melodically Look Up draws influence from Roxy Music, Steely Dan, and Nancy and Lee to be an intricate album without feeling cluttered. Written in 2016 it lyrically reflects the shock and confusion of Brexit and a country-divided.

The album was launched through a Pledge Music campaign and follows on from his three other solo albums – 2008’s Memory Muscle, 2014’s A Flash of Darkness, and 2015’s album of covers A Taste of Mark Morriss. Touring solo and back out on the road with The Bluetones meant beyond its limited release Look Up took a back seat, but now its time has come.

RY co-founder Sarah Lay said, “I’ve interviewed Mark a few times in the past about his solo work and about The Bluetones so I knew from those conversations what an absolute enthusiast he was about all kinds of music, and about songwriting.

“I still didn’t anticipate the sound of Look Up though and even with multiple listens I’m still unravelling the detail and finding the musical touch points. There’s moments of polished synth-pop, that recognisable literary tilt to the lyrics, and melodic conversations through some sweet time signature changes. We can’t wait to share this carefully constructed and catchy pop album with you all. ”

RY co-founder Pete Darrington said, “I was busy making records myself so I have to admit I didn’t really pay much attention to The Bluetones at the time other than the fact that their crafted guitar pop game was clearly strong enough to help them weather the britpop hype storm.

“But Mark’s solo work is eclectic, brave and unashamedly catchy. Perfect pop music of Pet Sounds proportions. Be prepared to put aside any preconceptions of what you think this record sounds like. If ‘Slight Return’ is ‘You Really Got Me’ for the britpop generation, get ready for Waterloo Sunset’.”

Of joining the roster Mark Morriss said, “I’d almost given up thinking I’d find a record label with a sense of energy and enthusiasm that can keep up with me, but at Reckless Yes I think I’ve finally got that team. I’m delighted to be working with them for the release of Look Up. This album means a lot to me, and I’ve been searching for some time now for the right home for it.”

Look Up will be released in 2019 on limited edition coloured vinyl, CD, and digitally and you can follow Mark on Spotify to be notified of new music. Make sure you’re signed up to the Reckless Yes mailing list to hear the detail of this release and other news from us, first.

You can read an interview with Mark by Sarah from 2015 about his last solo album A Taste of Mark Morriss on Louder Than War. In it she notes that off the back of that album he ‘who now has the ingredients to give us some of the best work of his solo career’…

Mark has loads of solo dates coming up so make sure you get along to see him:

To see our full roster of bands check out our artists, and if you’re thinking of contacting us please read our demo submission policy first.