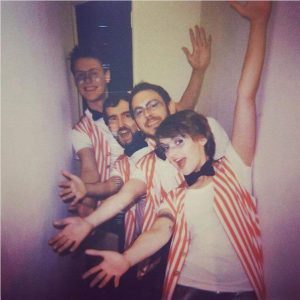 Back in 2016 when we were doing our weekly radio show The Rumble we played the debut track from an indiepop band that we were both excited about. That band were Fightmilk and we’re extra excited that we now get to work with them to release their debut album – an album which has exceeded the high expectations we’ve nurtured these last couple of years.

Two EPs in Fightmilk self-released their debut collection, before joining Fierce Panda’s EP Club for their second. It garnered them love from Lamacq and beyond and we’re sure this will only continue to grow with the release of their first full length record.

Sarah Lay, Reckless Yes co-founder said, “From the first time we heard Fightmilk and played them on The Rumble we hoped we’d get a chance to work with them. We instantly loved their pop sound, their wry lyrics, and their sass.

“Thrillingly the debut album is even better than we ever could have hoped for and well worth the wait – a brilliant album of indiepop hits-in-waiting with crunching guitars, catchy-as-hell hooks and a swagger-and-smirk camaraderie you can’t help but fall in love with.”

Pete Darrington, Reckless Yes co-founder said, “Fightmilk is one of those bands where it was just a matter before they became part of the Reckless Yes family. I first discovered them in my inbox in 2016 when looking for something sassy, (tongue in) cheeky and ‘this time next year you’ll thank me for this’ utterly brilliant to play on my radio show. They stood out a mile, especially as the note attached from Sarah said ‘YOU MUST LISTEN TO THESE NOW!’

“I instantly fell in love with their Blend of Elastica guitar cool meets Pulp’s wry ‘kitchen-sink’ lyrical self deprecation. We watched and waited and listened with eager anticipation and when they finally announced it was time to do a proper debut album we jumped right in without hesitation! Fightmilk are the soundtrack to your ‘why can’t I adult like everyone else my age?’ life. You need them in your ears!”

Fightmilk said, “We’re very excited to be joining Reckless Yes and their brilliant and diverse roster of bands. We can’t think of a better home for our first album. Speaking to Pete and Sarah, it’s clear that it’s as much a family as it is a record label and we can’t wait to work with them.”

Check out the rest of our roster here and if you’re thinking of getting in touch please do check out our demo policy.