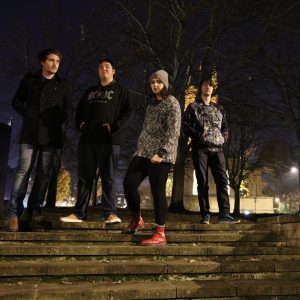 We’re pleased to share with you the news that Derby shoegazers Dactylion have joined the Reckless Yes Records roster.

Forming in Derby the four-piece only played their first gig together in January 2017 and have since joined us at Six Impossible Things and other Reckless Yes gigs.

They describe themselves as having ‘too many pedals, and not enough happy memories’. What they do have is some soaring melodies and gloriously fuzzed-out shoegaze tunes.

Sarah Lay, co-founder of Reckless Yes Records said, “From the moment we heard a first early bedroom demo from Dactylion we were excited about the prospects of the band and desperate to hear more from them. They haven’t disappointed with this first EP of track – perfect shoegaze reminiscent of Mazzy Star and Slowdive.

“This is a band learning their craft and yet the songwriting and sound, both on record and live, suggests a band with far more experience. We can’t wait to share their first release with you.”

Pete Darrington, co-founder of Reckless Yes Records said, “I’m especially looking forward to working with Dactylion. We got thirty seconds into the demo version of the only song they’d recorded so far and I totally fell in love with their music – the intricate guitar soundscapes that back the beautifully crafted harmonies of lead vocalist Hannah had me spellbound right from the off.

“But they’re not just brilliant musicians and songwriters – I was bowled over by their work ethic and how motivated they are. They have all the qualities that excite me in a new band – drive, vision and talent.”