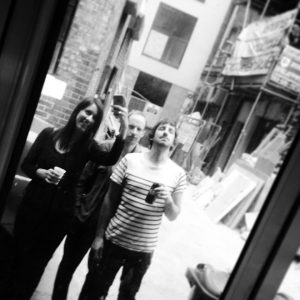 We’re pleased to share with you the news that Mower has joined the Reckless Yes Records roster.

Bringing this fine heritage to Reckless Yes Mower are making a welcome return after 12 years away, with new music due in summer 2017. Time has only sharpened the three-piece’s knack for a catchy pop hook and rumbling rock riff, the rawness of their early lo-fi work melding with the melodic tilt of their latter on their new material.

Reckless Yes co-founder Sarah Lay said, “A band once described as a ‘poppy Sonic Youth’ we’ve long been fans of Mower at Reckless Yes so I’m delighted and excited to be working with the band as they re-emerge onto the scene with more catchy-as-hell and raucously melodic power-punk.

“The new tracks are sounding massive, giving side-eye to the political situation while tearing up the dance floor, and we’re excited to share them with Mower fans old and new.”

Peter Darrington, co-founder of Reckless Yes, said, “I’ve always been a fan of mower from their Transcopic days. When I heard they were back together and had been in the studio I was keen to hear the new material and hopefully play it on my radio show.

“I was stoked to find the new stuff is even better than they were before – how many bands can do that after taking a long break? Asking them if they’d like to join Reckless Yes was a no brainer – expect revved up high octane lo-fi garage pop that is sassier and catchier than ever!”