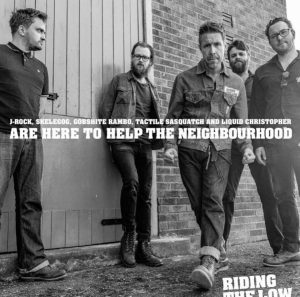 We’re pleased to announce a new addition to the Reckless Yes roster of artists as rock n roll band Riding The Low sign with us.

Ten years as a band, two albums and some sweet touring with the likes of The Charlatans, as well as festival dates at Kendal Calling, Electric Fields and Festival No6, Riding The Low are from Burton on Trent and make pure rock n roll noise.

Fronted by Paddy Considine, perhaps best known for his acting and directing career, anyone writing Riding The Low off as an actor’s vanity project is making a sore mistake. For this is a gang, in truest rock n roll sense, with tunes as full of melody and emotionally loaded as any in the Guided By Voices catalogue they cite as a major influence.

Sarah said: “Riding The Low are one of those bands which both take you by surprise and yet work on a completely obvious level when you hear them or see them live. They just are pure rock n roll; a gang of friends making guitar noise, all the swagger without the intimidation and big melodic riffs wrap around image-filled lyrics for an emotion and energy fuelled sound.”

Pete said: “I’m really looking forward to working with Riding The Low – when I first saw them last summer I was completely blown away by the intensity and energy of their live performance. Their output is nothing short of prolific and they seem to bash out quirky but catchy alt-rock classics almost effortlessly. If you love Guided By Voices, you’re going to love Riding The Low.”

We’ll be bringing you news of their first release with Reckless Yes soon but in the meantime you can find them on their website, on Facebook and on Twitter. You can read an interview Sarah Reckless did with Paddy Considine for Louder Than War here.

See the rest of the Reckless Yes Records roster here.