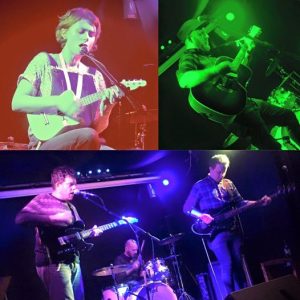 The first year of Reckless Yes is done, and what a year it has been, topped by a brilliant night last night. We’ll be putting together a highlights reel post of our memories from 2016 soon but we had to talk about Six Impossible Things.

Last night’s line up has been the most difficult to bring to the stage, not because of any of the artists involved who are all brilliant, but because of circumstances. Originally scheduled for September we postponed our date when the need for a Dubrek fundraiser arose and we’re so, so glad to see the space back in working order thanks mostly to hard work from Jay and Victoria but also the support of Derby’s music scene. We’re even gladder to see our records stocked in their shop alongside some other really cool labels and to see a real hub for the local scene emerging this way.

So, we squeezed our re-arranged date in before Christmas but at the expense of going up against Christmas office parties and other festivities. We also had a couple of changes to our fourth band slot and eventually went ahead at the eleventh hour with just three.

But what a three they were. Eclectic but never less than excellent. Pete already summed it up in this post on Facebook:

“A huge thanks to everyone who came to our Reckless Yes Xmas soiree last night. We really enjoyed your company and the community feeling of the night. It felt like a family gathering rather than a gig. Hard to believe that this time last year I didn’t know any of you.

“While we knew it was never going to be sold out like our last one – lots of our regulars on Xmas do’s etc – we really enjoyed the diversity of the music and the way everyone hung around chatting for ages after the gig finished.

“Highlights were Shelley Jane‘s impromptu Christmas song that she stopped in the middle of to ask her husband to be Robin in the audience if he could help her remember the 3rd verse! Mark Jones‘ simply mesmerising guitar playing and James Stewart taking time out mid set to say lovely things about RY and all the hard work we’ve put in to getting people out of their living rooms and in front of live music of all sorts as well as helping to put bands from our city in record shops, in the music press and on the radio.

“Next year will be even better, we promise you!”

It’s true, this time last year we didn’t know each other never mind most of you on the Derby scene. It was amazing to see another three amazing bands with the ever-expanding Reckless Yes family.

Next year will be even better – we start the year with Desperate Journalist and The Empty Page on Saturday 28 January and we’ll be releasing Pet Crow’s debut album in February. We’ve also shows with Nine Tons, Batteries and Mouses to announce and a You Want Fox release. The next Six Impossible Things will be in March and we’re pretty sure we’ll have a load more stuff we say a reckless yes to as time goes on.

In the meantime – if you’re looking for a festive gift for yourself or someone else may we recommend either of the records we still have in stock? Unqualified Nurse Band’s Debasement Tapes and LIINES’ Disappear / Be Here would both make any heart shine with Christmas joy. Buy them here.