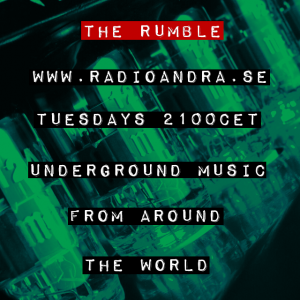 Every Tuesday night from 8pm UK time you can hear The Reckless Yes do The Rumble on Radio Andra.

Presented by Pete he plays 90 minutes of the best underground music from around the world and Sarah joins him with a weekly recommendation from Louder Than War. They produce the show together.

You can tune in live at http://radioandra.seor get the podcast from http://therumble.podomatic.com.

You can listen again to this show on our podcast. We’re next on air on Tuesday 13 December 2016 from 8pm UK time.