We do enjoy a nice bit of synchronicity here at Reckless Yes – the sort of coincidence we like to think of as a nod and a wink from the universe that we’re doing ok. I hadn’t realised until a couple of hours ago that it’s a year ago today since I first wrote about LIINES on Louder Than War. The synchronicity? Today is release day for their first single with us – RY003 Disappear / Be Here, a double A is out digitally and on limited 7″ pure white vinyl from today. 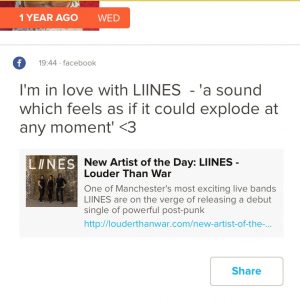 Back then I said: “LIINES are creating a sound full of urgency and brooding menace, a sound which feels as if it could explode at any moment, the ferocity and vitality barely containable. It is a sound that, without a doubt, you need to hear” and that still fits for today’s release and the band they have developed into over the last 12 months.

LIINES became a reckless yes after I took Pete to see them play a Scruff of the Neck showcase in Sheffield in March. It was the first time I’d seen the band play live and they blew us both away; the combination of space and insistency in their sound creates a thundering claustrophobia, a musical palpitation of jittery apprehension and soaring exhilaration. A quick chat with the band after their set (about Sonic Youth and Take That), followed by a meeting in Derby and we were thrilled to find they wanted to work with us too under a combined management and release deal. We’re still thrilled. And very very proud.

The band worked with producer Paul Tipler on Disappear and Be Here and they’re back in the studio with him today to work toward their debut album. The LIINES train just keeps rolling and while we’re celebrating today’s release and the tour we’re all looking forward to what comes next.

Press response to the single has been immense – not just lots of it but hugely positive on all fronts. We’ve had great support from John Kennedy on his Radio X X-Posure show, and from Amazing Radio as well as coverage from The Quietus, Gigslutz, Louder Than War, God Is In The TV, The National Student, Collapse Board, Even The Stars (and to Dave Brown we are forever in debt for tipping us on this band a year ago), Flick of the Finger, LOUD WOMEN and more and more and more!

So, we’re saying a very happy release day to RY003 – LIINES double A single Disappear / Be Here – out now digitally and on limited 7″ pure white vinyl. Join us on the first night of their tour tomorrow at Birthdays, Dalston (with Heavy Heart and Lull) to celebrate!

More options for buying coming soon and you can pick up a copy from the band (along with a selection of other very sexy merch) at one of their gigs: