It’s with a heavy heart that we’ve taken the decision to cancel September’s Six Impossible Things, but in all honesty it wasn’t that hard a decision. We want all of you who have been supporting the scene through Six to put your energy (and your pennies) elsewhere right now.

If you’re around Derby you’ve probably heard by now about the recent flooding at the new Dubrek studios on Becket Street. Over the last few months owner and scene lynchpin Jay Dean has been doing renovations on the formerly derelict building to turn it into the latest iteration of the long-running rehearsal space and studio. Dubrek has long been central to bands and musicians in Derby but with added venue and cafe space it was set to become a key piece of the wider cultural scene. It was set for a grand opening in mid-September.

But flooding on 20 August have significantly changed those plans. Happening while external contractors carrying out work for the landlord neglected to secure the roof when leaving for the weekend the ground floor of the building has been extensively damaged.  Much of the work Jay has done needing to be torn out and large parts of the building are out of action. While an insurance claim is in the pipeline the immediate future of the business was under threat – without rehearsal rooms and a studio Dubrek couldn’t continue.

In heartwarming collective action reminiscent of It’s A Wonderful Life, the local scene has rallied and done all they can to support Dubrek with the cash it needs to keep its doors open in the immediate future. A GoFundMe was set up and has so far raised more than £2600 toward a £3k target. If you haven’t given but would like to do so then you can do it here. 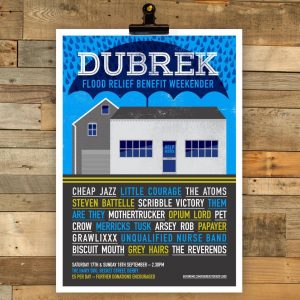 And now a two-day fundraiser at the Hairy Dog has now been announced – showing more phenomenal support from the scene who recognise what a vital part Dubrek and Jay have played, and need to continue to play.

While Pete and I were involved in the initial idea of the fundraiser the work to book bands and organise quickly has all been done by other marvellous people. Taking place over the 16 and 17 September there is a great line up of local bands (including Reckless Yes signings Unqualified Nurse Band and Pet Crow) for £5 per day (although giving more is encouraged – all of the ticket money will go directly to Dubrek).

So – no Six in September, which is disappointing as so many of you have been digging the event and showing your support (and also as we’d finally got a line up which wasn’t only boys). But it makes way for a vital way for you to support the local scene, be a part of the music community and listen to some awesome Derby bands too. We want all the focus on this event and for any pennies you have spare to go to supporting Dubrek.

We’ll be bringing you the bands from our planned line-up – Azzurro Peaks, Shelley Jane, Little Courage and Natterers – at some point as soon as we can.  The next Six Impossible Things will be Friday 18 November and the line up will be announced soon (it’s a REALLY REALLY good one).

And don’t forget we have releases too: