It’s all barcoding and boxing up records to go off to the shops today at Reckless Yes HQ but we’re taking a short break from lovingly sticking stickers to tell you about this new show we announced this week. 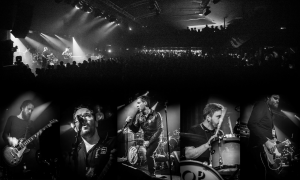 Here’s Riding the Low to introduce themselves:

“Riding The Low hail from Burton on Trent. Look it up. They play rock and roll. Look that up.

“They have released their second album, ‘Riding The Low are Here to Help the Neighbourhood’. Listen to it. Listen to all their shit. It’s good.

“They play The Hairy Dog on Thursday October 13th. Come down. It’ll be a blast. They have guitars and drums and stuff. They make noise. Sweet noise.”

Fronted by Paddy Considine the five piece take their ideology from Guided by Voices and produce some honest and intelligent melodic rock.

Interviewing Paddy for Louder Than War Reckless Sarah described them thus: “In Riding the Low you have a rock n roll band with a lot of heart; big melodic riffs wrap around image-filled lyrics for an emotion and energy fuelled sound. They have the swagger without the intimidation, they’re a gang without being elitist, their everyday earthiness is what gives them flight.

“Live they are the quintessential rock n roll band, bursting with snarling high-kicking passion, and while that energy has the edge taken off on record it doesn’t dim their fire or diminish their emotional resonance.”

We’ll announce support bands soon but in the meantime grab a ticket and spread the word!

You can read the rest of the interview with Paddy Considine – about his love of Guided by Voices, being addicted to songwriting and supporting The Charlatans – on Louder Than War.