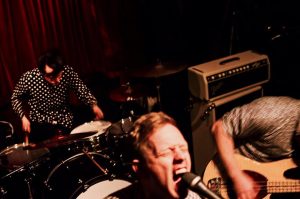 Debasement Tapes will be released as a limited coloured vinyl and digital download on 16 September 2016.

Unqualified Nurse Band has consumed the last 60 years of rock n roll history and mastered the form. Debasement Tapes is a cataclysmic explosion of all that has gone before, deconstructing that history before smashing it all back together in a ferocious reaction to the norm. It is a 12 song, 30 minute blitz of genre-bending guitar-led sound, catching you in a maelstrom of past, present and future rock n roll.

Pete Darrington of Reckless Yes said: “I will piss in the sink of anyone who doesn’t agree this is the best rock n roll record of the decade.”

Sarah Lay, of Reckless Yes said: “A quite frankly astonishing band so embedded in rock n roll history they’re able to tear it up and start again. Live they have a furious energy, with no two sets ever the same. This band is loud, masterful and about to release one of the best records of 2016.”

Chris Jones, guitarist and vocalist in the band, said: “We’re really happy to announce that Reckless Yes Records will be releasing our debut album. We’ll be touring throughout the summer and to coincide with the release of the record.”

Full details of the band including upcoming live dates can be found on Noble and Wild. Get Unqualified Nurse Band’s current single Getting Sweaty from Bandcamp for a taste of what’s to come.

The first release from Reckless Yes is the limited coloured 7″ from Bivouac – a double A featuring Sweet Heart Deal and Deep Blue Sea Surrounds. It is released on 16 June 2016.