Reckless Yes are teaming up with Gringo Records to give the second album from Glasgow trio Order of the Toad a full release across vinyl, CD and digital in 2020. 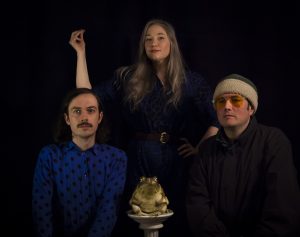 Quite unlike anything else around Order of the Toad sit somewhere between Baroque and Psyche, with touches of Country and Pop thrown in too. It makes for a rich soundscape full of surprises and delights.

Monorail Music described the band as: “Melodically, Order of the Toad have something of a medieval fixation, filtered through late 60s influences which end up sounding something like Jefferson Airplane (not least in vocalist Gemma ‘The Wharves’ Fleet’s powerful lung-force) mixed with British psyche heat… think Kaleidoscope or even Syd Barrett drug-damaged whimsy. There’s no other band doing this in the UK that we know of, a musically rich tapestry woven from strands outside current trends.”

The three piece began when Gemma Fleet (The Wharves) and Robert Sotelo (Upset the Rhythm) relocated to Ibrox in Glasgow end of Summer 2017, where they met and subsequently began making music with drummer Christopher Taylor under the guise Order of the Toad. Their self-titled debut album was released in 2018 and the follow-up will get a full release later in 2020.

On signing across the two labels the band said: “Having spent 2019 recording a sophomore album at Glasgow’s Chime Studio with Ross McGowan, Order of the Toad are delighted to announce a record release later this year via two of our favourite labels.

“The legendary Nottingham imprint Gringo Records and the newer genius of Reckless Yes will team up to help conceive ‘Re-Order of the Toad’; 12 new cuts in glorious hi-fi from the trio, across a multitude of formats, in what appears to be the perfect collaboration for all involved!”

Reckless Yes co-founder Sarah Lay said, “It only took one listen to know Re-Order of the Toad was a very special album indeed. The baroque and medieval influenced sound, mixed with ‘70s psyche and pop make this something you really have to hear to believe. From moments a minstrel would be happy to rock forth, to touches of Kate Bush and Talk Talk – we love music which is unconstrained by genre but remains hugely melodic and Order of the Toad hit that pairing straight on.

“Not only do we get to release this amazing album but we get to team up with Gringo Records for the release too, and deliver it not only through the usual places but to Reckless Yes and our joint Last Night From Glasgow members too.”

Reckless Yes co-founder Pete Darrington said, “I’m really looking forward to getting stuck into another co-production, we really should do more as I think working with like-minded labels is a vital part of keeping the underground alive and flourishing.

“This time it’s with fellow East Midlands’ label Gringo who I’ve admired for a long time now. What’s even better is it’s on the new Order of the Toad record. If you love Gemma’s work in The Wharves, you’ll love this band and their quirky garage pop sound. If you don’t know either band, don’t worry, we’ll help you fix that with this delightful and glorious album!”

The album, Re-Order of the Toad, will get a general release and also be available to members of either record label, and those holding a joint membership with Reckless Yes and Last Night From Glasgow.

Find Order of the Toad online

You can find more about Gringo Records here.

See Order of the Toad live

Our memberships are a great cost-effective way of discovering your next favourite band, getting hold of some limited edition or member exclusive vinyl, and saving your money while supporting independent artists.

Our vinyl membership gives you a huge saving of around £150 while a digital membership is great if you don’t already know our bands and will still save you around £70 compared to buying everything through Bandcamp. If you’ve not yet joined there is still time – all the details can be found here.